“It does not matter how long you are spending on the earth, how much money you have gathered, or how much attention you have received. It is the amount of positive vibration you have radiated in life that matters,” ― Amit Ray

There’s a lot about the world that isn’t very peaceful right now, but did you know there is something you can do to change that? The energy of people putting their consciousness together to create peace in our world will bring change to our planet. The International Day of Peace happens on September 21, 2014, and we hope you will take part.

There is a story about a group of prehistoric cavemen having a conversation.

“Guess what?” the first man said. “We’re talking.” Silence. The others looked at him with suspicion.

“You’re crazy,” the third man said. “I never heard of such a thing!”

Talking, undoubtedly, was considered natural until the first man rendered it visible by exclaiming, “We’re talking.”

Please join us on the International Day Of Peace on September 21, 2014. There will be a Global Meditation at 12 noon PST. The message? That peace is not only possible, but essential. When we all connect as one, we lift the vibration of all of humanity. We lift the vibration of the world. You can check the schedule below to see what time it will be in your part of the world or go to http://www.timeanddate.com/worldclock/converter.html. 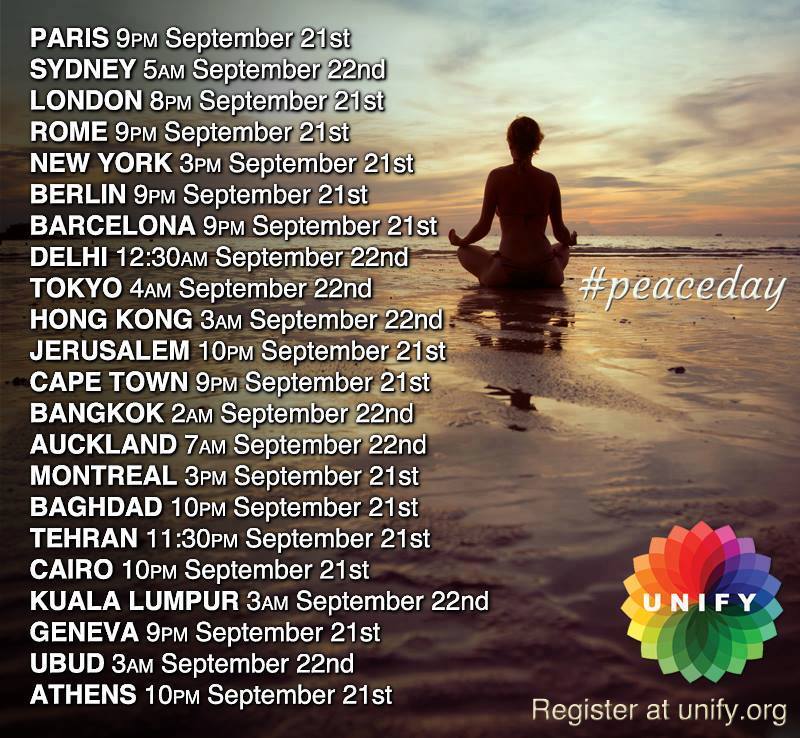 You can also sign up for the audio broadcast with a guided meditation and messages from spiritual leaders and peace activists at www.unify.org .  They also have a listing of all events happening for the International Day of Peace on their website.  Thousands of organizations around the world are taking part in this movement. Let’s start meditating on all the great things happening across the earth right now. Together we can change the world.